The saying “too many cooks spoil the broth” is true everywhere, including in the work of non-profits.

Rim Zouabi Abu-Aschak, Community Relations Director at the Al Fanar Organization, which works to empower Israel’s Arab community and integrate Arabs in the workforce, decided to tackle this challenge. “I saw that there are a number of organizations – non-profits, government agencies – which are all working in parallel on employment advancement in the Arab community.  It really bothered me to see that many times work was being done in parallel rather than in cooperation,” says Zouabi Abu-Aschak.

Merchavim joined Zouabi Abu-Aschak in her quest for a significant and effective change.

Zouabi Abu-Aschak got to know Merchavim at first when she participated in the Social Cohesion Leadership Program, an intensive program which brings together managers from the private, public and non-profit sectors (led by Merchavim, The Arison Foundation and Ruach Tova). During this program participants get to know Israel’s diversity at a deeper level, learn together and work on programs to improve social cohesion within their organizations. The program also encourages cross-organization cooperation and participants continue to cooperate long after they complete the program. 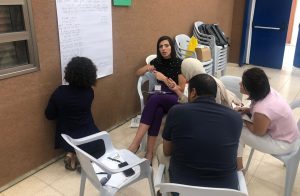 The current state of the work in advancing employment in the Arab community, we need to improve communication and cooperation between organizations with similar agendas.

To this end Zouabi Abu-Aschak established “The Organizations Forum” – the Forum, led by Al Fanar and Merchavim, was meant to build partnerships between people and organizations furthering the same agenda and encourage cooperation, thus releasing the bottleneck holding up progress in the arena of Arab employment.

This week the sixth and last meeting of the Forum took place, and was led by Sumer Far, an experienced workshop leader at Merchavim, who brought leaders and presenters with experience in the field.  At the meetings, participants identified the main obstacles in the way of advancing Arab employment, characterized them and brainstormed possible solutions. The Forum launched three initiatives to be developed in 2022.

“We’re looking at things through the angle of employment, but really the repercussions are much wider,” explains Sharon Galperin, Head of the Diversity & Inclusion Training for Organizations Program at Merchavim. “Employment brings resilience, improvement in welfare and reduction in crime… if we succeed in directing all resources in a concerted effort, we will be exponentially more effective in bringing impressive results.”

Zouabi Abu-Aschak tells about the conclusions the Forum arrived at: “After examining the situation, the Forum’s participants identified the importance of giving local municipalities a leadership role. Municipalities should lead this effort, with the full cooperation of support of all involved. This was not a foregone conclusion, but points to a deep understanding of reality and the ways in which we can make a real difference.”

Zouabi Abu-Aschak adds “It’s important to emphasize that this means support for Arab municipalities and empower them to lead the effort to advance employment in their communities.”

All rights belong to the Merchavim Institute 2021

Please leave your email address to receive our newsletter